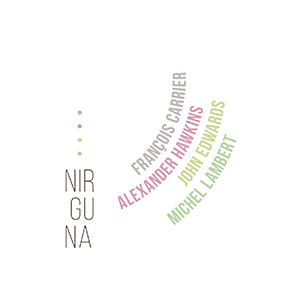 François Carrier and Michel Lambert played in a quartet with John Edwards in the legendary Vortex in London in 2011 with Steve Beresfort. They continued their collaborations with John, recording two fantastic discs in 2015 and 2016, described above. Here they are back in Vortex in an atmospheric concert, joined by an new star on the European piano firmament, Alexander Hawkins, boirn in 1981 in Oxford. Alex will record a year later a masterpiece solo album for Intakt, “Iron into Wind”.

The ideas on this double album are not surprising this is kind free jazz at the highest possible level. But, the presence of Alex makes a qualitative change. He is an extremely creative pianist, working both as a member of the section and as a soloist and leading force. This all happens simultaneously on the opening “Saguna” that lasts nearly 38 minutes. François is full of expression on this track an his conversations with the piano are delightful Alex oscillates between all possible styles of free jazz, reminding me of Cecil Taylor sometimes, and of Matthew Matt Shipp on other occasions. But, principally he is playing his own original, and incredibly complex and creative music. John and Michel, as always, are both miraculous. The first CD ends with a shorter, 13 minutes long “Jivatma”  — not as impressive as, but still a stupendous track. It is faster and has more fragmented rhythms and motifs that can even cause associations to “free kind Latin jazz”.

The second disc opens with another highlight, 35 minutes long “Paramatma”, the most beautiful track, with plenty of “melodic motifs”, and absolutely extra terrestrial dialogues of the piano and the alto. John plays a lot here with the bow and makes the music a little similar to the contemporary chamber music. “Paramatma” is perhaps the best illustration of the fact that Alexander is a truly perfect partner for the trio. In the second half of the track, François goes beyond the “kind free jazz” frames, and Michel has his particularly spectacular moments. In the last 5-6 minutes they all come to the “kind order”, and finish in a majestic way. The title tack, “Nirguna”, closes this two sets. It confirms the mystery of this music. They play collective improvisation in a quartet, in trios, they play duos and solos. The performance is so dense of energy and synergy, and so embedded with creative Force that is generates new qualities. So, what I said in the beginning was not completely true. This is the “kind free jazz”, but in fact it is a new and surprising kind of the “kind new jazz”. The dialectic triad  — thesis-antithesis-synthesis of the trio Carrier-Lambert-Edwards and the piano of Hawkins is the clue!!!