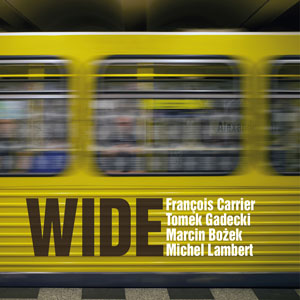 Featuring Francois Carrier on alto sax, Tomek Gadecki on tenor sax, Marcin Bozek on bass & French horn and Michel Lambert on drums. The Quebec-based duo of Francois Carrier and Michel Lambert have been working together for more than a decade, sometimes as a duo but more often as a trio or quartet. They have worked with a diverse variety of other kindred spirits: Paul Bley, Dewey Redman, Steve Beresford, Alexey Lapin and John Edwards. I hadn’t heard of the other two members of this quartet, although this disc was recorded in Poland, which is where these two are most likely from. This disc begins quietly, with subtle, swirling acoustic free improv simmering. Tenor player, Tomek Gadecki, is in fine form, swirling those intense Trane-like lines, the spiritual vibe ascending higher and higher as the music unfolds. The rhythm team is also powerful, providing an intense cushion underneath. When Mr. Carrier enters on alto sax, he plays slower while keeping the equally strong and focused, the vibe calming back down to another slow burning sizzle. Things again ascend to a powerful, free/jazz blasting conclusion, building in intensity as they go. This entire disc sounds consistently inspired and is often riveting. If you are a fan of free/jazz at is best, then this disc is for you!